"Visitors have been busy suggesting names that could be embroidered (sampler style) onto the portraits I’m planning to make at Dale House. I was excited to find many names for me to collect and then was intrigued to find a comment posted among the nominations. The slip of paper with its simple two sentences spoke powerfully of a respect and passion for the portrayal of early Quakers in Coalbrookdale.

I hope I’m right in taking it as a piece of guidance – please do not trivialise – rather than a criticism – you have trivialised - as hearing visitor fears for the project is a rare and useful thing. I also hope it will become apparent to this visitor and many others that I plan to do precisely the opposite of trivialising. By highlighting the lack of physical portraits I aim to show the inescapable importance of portraiture and, therefore, the strength of the early Coalbrookdale Quakers’ decisions not to be remembered in this way.

In modern language we might say we’re obsessed with appearance but back in 1854 the philosopher Thomas Carlyle was already arguing the search for a portrait in historical research had long been a “primary want”, adding that historians will: “search eagerly for a portrait, for all the reasonable portraits there are, and never rest till he has made out, if possible, what a man’s natural face was like. Often I have found a portrait superior in real instruction to half-a-dozen written biographies…” 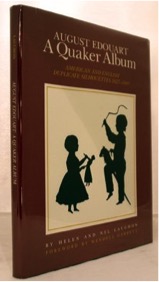 By coincidence, just before discovering the visitor comment I found an excerpt from this Carlyle letter in a book of Quaker silhouettes, collected by the Ironbridge Gorge Museums Costume Project as a guide to Quaker clothing. Seeing August Edouart’s silhouettes for the first time I was astonished by their ability to capture personality and movement. The details omitted in the hand-cut method are more than compensated for in his style of grouping families, creating narratives and capturing figures in a point of motion (which light-needy photography at the time could not achieve).

I realise this needs to be a more significant visual reference for me than the oil paintings and early photographs that would be my usual calling place for material. Categorised by the book’s authors as a ‘folk art’ silhouette creation also sits better with the uneasy relationship with (self) representation explored by Quakers. As Anna Cox Brinton wrote: “Friends belonging to the first generation of Quakerism consistently refused to have their portraits drawn or painted. They preferred to be remembered by their deeds, preserved in their journals, in the meeting records or prefixed to early Quaker publications...". Despite all the evidence, context and writings about faith, such is the importance of portraiture that a legend in Coalbrookdale persists that from a certain angle a profile of Abraham Darby III can be seen in the ironwork beneath the iron bridge he created. I love what this reveals about our relationship to the bridge and the characters in its history, but I’m also wary of the unintended disrespect it implies. Although I am certain the myth that he cast a secret portrait of himself is untrue it feels harsh to denounce its believers, who see this modest-living man created a publicity statement of global impact. It was useful, egalitarian and fundraising, but undeniably also a big business promotion and in the Darby’s operations this allows for a minor contradiction as they united business and family, though trying to promote one and remain modest with the other. 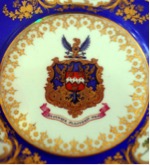 In the museum collection at Rosehill House we see a number of portraits that could also confuse visitors being told early Quakers eschewed portraiture, but modesty remains apparent with silhouettes and miniatures evidently created as personal keepsakes rather than as public exhibits communicating status or wealth. The striking exception in the collection is the grand coat of arms (in tapestry and on dinnerware) favoured by Francis Darby (1783-1850), son of the iron bridge creator. This exception – as all exceptions – is exciting of course as it shows the importance and scope of the unexceptional, the very many generations who, as my anonymous visitor put it “chose to be ‘unknown’ physically”. I hope through the residency much more of the unknown can be highlighted, to show the important gaps, the reasons for them and how these fuel myths and characterisations."

It’s nice to have a face

"I was reminded earlier about a conversation I had a few weeks ago about how our Abraham Darbys aren’t the only notables without portraits. Visiting the Canaletto exhibition at Compton Verney before it closed, I was lucky enough to have a behind-the-scenes talk with its curator Stephen Parisienne, who pointed out the self-portrait of Canaletto in the show may not be Canaletto at all. “Still,” he said cheerfully. “It’s good to have a face to start the exhibition with.”

Indeed it is and this is the point; we want to see people not just hear about them or see evidence of their work. The face is usually the most important piece of evidence we desire when learning – or making judgments – about a person.

Years of arguments over the reliability of historic portraits aren’t just an academic or financial exercise (although we know a portrait of Shakespeare will be a lot more valuable for sale or visitor-attracting if proved authentic). The issue is more fundamentally about how we relate to other human beings and how we gather ‘evidence’ in making decisions. This is why interrupting the view of a face, introducing a mask, a burka or even face paint, has such an impact.

I’m really looking forward to exploring this more through the handful of silhouette portraits of Darby extended family members on display at Rosehill House (next door to Dale House). Using a combination of backlighting, black face paint and disguise tatter coats, visitors will be able to see me obscure, photograph and further obscure some key people in Coalbrookdale’s current and past stories. I’m open to suggestions on who should be photographed, just see me at Dale House, leave me a note or get in touch via twitter @fayeclaridge.

Room with a view

"It’s very exciting that I’ve ‘moved in’ to Dale House, setting up to make work and hold meetings in the parlour that was first used for a Quaker meeting in 1717.

Yet amid all this continuation, including my contact with their descendant Michael Darby and the Quakers who still meet at Dale House, as I look out the large Georgian windows I’m struck with the amount of change seen by this steep-sided valley. From rural gorge dominated by woodland and river it became a noise and smoke-filled gulley, the aptly named blast furnace operating all day and all night – with people previously brought up for farm labouring now working night shifts for all but the driest weeks of the year.

Now in the silence of the museum it’s almost impossible to imagine the impact the furnace had on the community and landscape here. I sit on a window bench and read about the prosperity this bought – wealth, education, housing, opportunity – and fight the notion industry was a destructive monster. Thomas Hardy and other Romantics may not have seen how industry shaped and created as it changed places and people but later critics like William Morris sought to find a compromise, arguing for machines to free people from repressive labour but not to dehumanise, or to take over satisfying labour. Perhaps he was looking to reconcile rather than celebrate the irreversible.

Perhaps, too, this is one of the jobs of the current museums here. They tell a multi-layered story, weaving evidence with context and personality but with little critique. Rather like the glut of Channel 4 exposés into travellers, prisoners, the unemployed etc, an edited description is presented with no transparent opinion. The one opinion that cannot be hidden, however, by their very presence is: This matters. Visitors to Dale House are shocked to hear that the home was nearly demolished in the 1950s, after housing iron works owners and managers for almost 200 years and overlooking the works for even longer. Their shock tells a fascinating tale about where this place and the industrial story sits in our current psyche."