"Through research and residencies I’m very lucky to visit a wide range of places, but I’m willing to admit the Aga works were a bit of a shock. 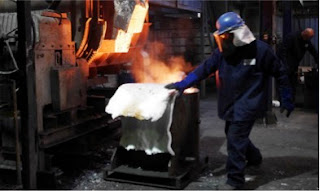 The Coalbrookdale foundry is a place where hard, heavy, noisy, dirty work takes place. It’s an environment that’s uncommonly stressful on the senses, where workers have to be protected in some areas with breathing apparatus, fireproof suits, visors, ear defenders… you get the picture.

Yet there’s a really strong affection for the place. This is partly due its history as so many generations have worked foundries here from even before Abraham Darby’s arrival in 1709. But it’s also due to the nature of the work itself, described slightly reluctantly by the current manager as “a bit macho”. “It doesn’t suit everyone,” he tells me, possibly as a friendly jibe to the ridiculousness of me turning up for a tour in flip-flops and dress (soon rectified with borrowed overalls and boots).

Debbie (the only female employee at the foundry) describes the sound of the works as “a heartbeat” and says it doesn’t feel right when it’s quieter. 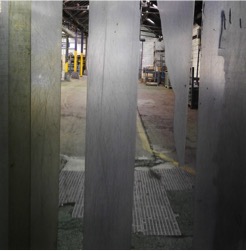 “Everybody hates it when machines are broken or away for repair,” someone else tells me. “The men want to be busy and they like to work hard.” It’s interesting that at the moment there are more job vacancies next-door at the museum than there are in the foundry."


Shifting Worlds: contemporary art and the Birthplace of Industry is a contemporary art programme produced in a partnership between Meadow Arts and the Ironbridge Gorge Museum Trust, funded by Arts Council England.