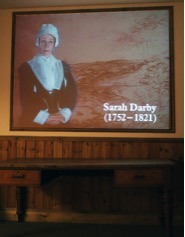 "A lot of what I’m looking at in the residency involves the role of women in the Darby family and, therefore, in Quakerism, early education, the iron business and, ultimately, in the Industrial Revolution.

The mothers, wives and sisters in the Darby family were at times shareholders and managers of the works. Diaries show us they were a regular sight in the works, understood the business and are recorded as joint signatories on loans and other business deals. This was in the 18th and 19th centuries, years before the wider British fight for (a semblance of) equality. In fact more than 250 years ago there were more women at management level in Coalbrookdale than there are today. Their achievements are extraordinary and can only be understood in the context of the Quaker faith.

As biographer Rachel Labouchere writes: “Quaker women, often with large families, [who travelled]… many thousands of miles away from their husbands and children, always seemed to astonish the world at large, but was accepted in their community and fully understood.” [i]

From the beginnings in the 1650s Quakers (originally called Seekers) believed women were equal in faith and were supported in public speaking and publishing. The Darby women who became ministers travelled extensively to speak at Meetings and either took nursing babies with them or left them behind (with family or staff) for weeks or even months at a time. Their long journeys on horseback were also often undertaken without a male companion.

The Darby women’s involvement in the business largely occurred after a male death and before a male heir was old enough to take over, but even so their involvement wasn’t limited to a caretaker role and some of the developments of workers’ cottages, banking and the brickworks were theirs. I think I’m right in saying it was their ability to take over that maintained the business in the family, as without them at worst the death of the head of the family would have meant selling the business, or at least the balance of ownership would have gone to other partners. 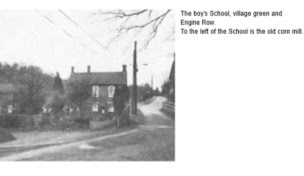 Their abilities had, of course, been developed through education as well as inclusion in business meetings and visits to the works. Again, years ahead of schools for the general public, Quakers supported education of boys and girls and the Darby children were all sent to Friends in what we would now understand as boarding school. By 1718 Abraham Darby II had started building schools for workers’ children and more than a century later, in 1846, Alfred Darby built a very large school with full support and donations from workers, to educate 700 children up to the age of 12.[ii]

The role of the male Darbys as fathers is also touched upon in the Darby diaries, where one notable letter from Abraham Darby to a business associate in 1758 states he might delay their meeting because he wants to be with the children at the time of their (then potentially harmful) smallpox vaccination[iii]. He also almost single-handedly brought up his daughter Hannah after the death of his first wife and the two were very close. 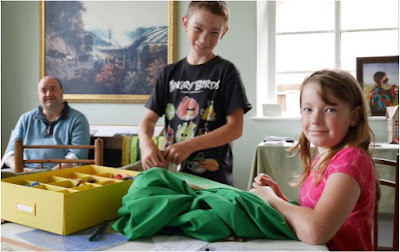 I don’t expect all of this to come across in the work I’m creating, but it’s been interesting to talk to visitors about why I’m embroidering names (or asking them to). Embroidery is a very accessible way into this important story. Visitors will look at the samplers in the collection and, hopefully after meeting me, will see them not just as remarkable works of skill but as symbols of education, empowerment and the joining of domestic and industrial talents."

Posted by Unknown at Wednesday, October 07, 2015 No comments: 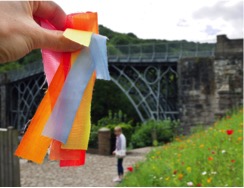 "I’m hoping to do something spectacular with The Ironbridge and as part of planning this I’ve been thinking about the bridge as a symbol of the Industrial Revolution. Bridges are a great symbol of unity, literally linking communities and enabling travel, but do they symbolise revolution?

The phrase ‘burning bridges’ is dramatic, riotous even, which might remind historians of the food riots that affected developing industry in the eighteenth and early nineteenth centuries. But this isn’t representative of the vale, where the Quaker Iron Masters saw very small-scale protests, possibly because of the worker allotments and welfare donations already in place along with the belief in fairness regularly demonstrated by the foundry owners.

Rather this bridge – and the company’s other achievements – were born out of stability, family, permanence. Perhaps the problem is the word revolution, which the Oxford dictionary defines as a “forcible overthrow”. Its origins are only slightly more helpful, developing from an old term to turn which at a push we might dramatize as a cranking up. 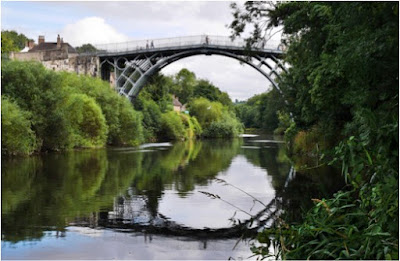 The aims of the Darby foundry owners appear broadly to have been to innovate and improve, certainly not to revolt. As their biographer Rachel Labouchereputs in, they wanted “innovations… that would improve conditions for mankind” [i]. They left a huge legacy, which could be symbolised so many ways. Beyond their technological advancements, reading the Darby family diaries reveals so many visitors who go on and further influence many others – like Cadbury, Lloyds, Nash, Darwin, Fry, Cash – and I even wonder whether Prince Charles’ vision of Poundbury (where workers, business and services co-exist) was affected by his many visits and role as Patron of the gorge museums. 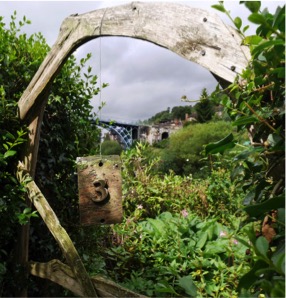 These connections – and so many more – make the bridge even more poignant as a symbol. It’s interesting as a work of engineering, it’s important as the world’s first iron bridge, it’s vital as a focus for cash-bringing tourism, it’s heartening as a symbol of continuing industry in the vale. But it’s strongest for me now as a symbol of the Darbys and the way their business, family and faith linked and the way their innovations made iron affordable enough to catapult industrial design all over the world.

They were a bridge between the rural and the industrial, the past and the future. And like all bridges (that aren’t burnt in revolution) they link so we can travel in both directions."