"The second part of my Aga visit was at the Ketley works, on the edge of Telford, where the iron created and moulded in Coalbrookdale is painted and assembled with other parts to (mainly) make cookers. The operation is large and varied and a more diverse workforce of men and women use widely different skills here, from metal shaping to graphic design. 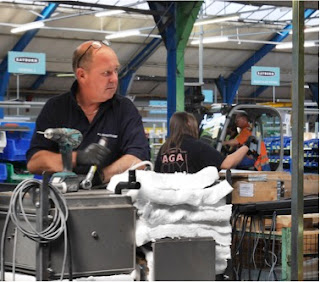 In the paint spaying section I was interested to see a sudden change from black branded polo shirts (now ubiquitous in business) to pure white overalls, each sewn with the individual name of its wearer.

For months I’ve been gathering names (from the present and the past near-endless Darby network of Quaker Friends, fellow innovators, employees etc) and I’ve been sewing these in reference to the samplers in the museum collection. So seeing embroidered names, in Aga, in the works made famous by the Darby family I’m researching, was a very pleasant shock.

Beyond this initial surprise, I’m curious about these uniforms, the way they differentiate these employees from the other strata (mainly made up of black polo shirt factory floor or own clothes in the office or call centre) and the significance of wearing an embroidered name. I may be getting hung up on the details here, but I’m certain being given a jacket embroidered with your name feels very different to being given a clip-on name badge. It has a permanence, it shows personal investment, it’s something you could be proud of. It’s individual. 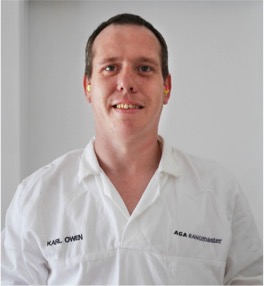 Yet the story I’m focussing on keeps slipping strangely between individual and family or group identity. The innovations that led to the Industrial Revolution in Coalbrookdale were led by three men with the same name. This wasn’t peculiar to them of course, they lived at a time when first sons were habitually named after their fathers and, usually, followed their father’s business. But it’s convenient for their story told in retrospect to have this obvious link across the three generations. It’s also very telling of how we mythologise individuals, especially when further reading tells you there were more children in the family named Abraham Darby whose stories are little know and there were other partners in the business whose contributions were as great as the three main protagonists. But does it matter there are three Abrahams rather than one in the story when we talk about the Darbys as stereotypes of Quaker faith or industrial innovation? Perhaps stereotype is too harsh a word, when museums, historians, story-tellers inevitably have to simplify stories and find the main themes that will interest a present-day audience. I started this series of blogs saying how much we like to have a face for historical stories but it’s equally true we cling to names (and dates). 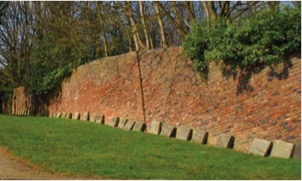 The Quaker burial ground above Dale House shows the Darby believers not at odds with us in this. Their tiny grave stones show just that: names and dates, nothing more. They deliberately reveal the bare minimum which, in itself, reveals (or confirms our understanding of) their non-conformist desire for simplicity. In this context the name is all-important, at its simplest to locate and at its broadest to commemorate. Visitors can see where Darbys lie and learn almost nothing of the individual but get a sense of their modest place as a tiny piece in a large and complex story."

Posted by Unknown at Sunday, September 27, 2015 No comments: