Initially thinking to turn text into movement through dancers and to take part of the library out of its usual building and into a festival setting in the form of a mobile library. I first referred to this project as the mobile library dance. Next came the long period of contacting various organisations and festivals. So, through months of contacting, explaining my concept, attending meetings, pinging emails back and forth, telephone and Skype conversations I came to have the shape of the performance coming together as it is now.


1916 was the last year the National Eisteddfod was in Abergavenny and so this was too good a chance to miss! 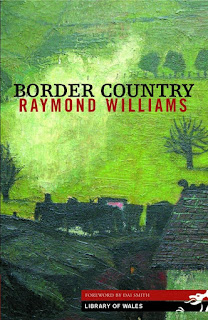 LOST LIBRARY Border Country puts the locally set novel in the limelight by featuring the text in the performance as well as highlighting the book in a short speech I’ve written and given twice so far in the run up to the festival. In the ethos of the Eisteddfod I have also had the speech translated into Welsh so that when the speech is performed it can be performed bilingually!


The book is by Raymond Williams (1921–1988), who was a Welsh academic, novelist and critic; he started writing Border Country in the late 1940’s and completed it in 1958; a railway signalman based in Pandy and his son being the central characters.